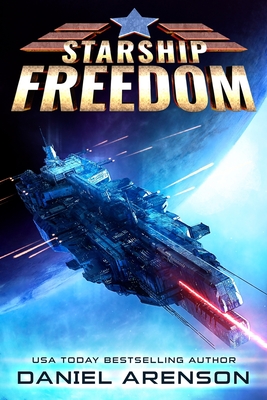 The starship Freedom is just a museum ship. Until the aliens attack

The starship Freedom was once a mighty warship. Today she's a tourist attraction. The space wars ended long ago. The Freedom is now a flying museum. The tourists love it. The Changing of the Guard, the starfighter aerobatics, the starboard cannon salute . . . it's the best show in the galaxy.

James King commands the starship Freedom. He hates his job. He was a real soldier once. Back when the Freedom was a real warship. He never imagined himself running a tourist trap. Right after Christmas, he plans to retire.

So much for retirement.

The aliens spare the starship Freedom. After all, she's only a tourist attraction. But not to Commander King. He will get his beloved starship battle-ready. He will enter the fight. The Freedom will fly to war again