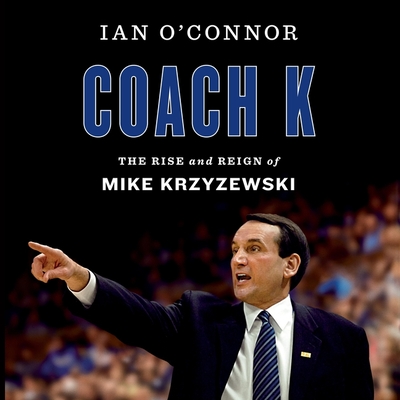 Mike Krzyzewski, known worldwide as Coach K, is a five-time national champion at Duke, the NCAA's all-time leader in victories with nearly 1,200, and the first man to lead Team USA to three Olympic basketball gold medals. Through unprecedented access to Krzyzewski's best friends, closest advisers, fiercest adversaries, and generations of his players and assistants, three-time New York Times bestselling author Ian O'Connor takes you behind the Blue Devil curtain with a penetrating examination of the great, but flawed leader as he closes out his iconic career.

Krzyzewski built a staggering basketball empire that has endured for more than four decades, placing him among the all-time titans of American sport, and yet there has never been a defining portrait of the coach and his program. Until now. O'Connor uses scores of interviews with those who know Krzyzewski best to deliver previously untold stories about the relationships that define the venerable Coach K, including the one with his volcanic mentor, Bob Knight, that died a premature death. Krzyzewski was always driven by an inner rage fueled by his tough Chicago upbringing, and by the blue-collar Polish-American parents who raised him to fight for a better life. As the retiring Coach K makes his final stand, vying for one more ring during the 2021-2022 season before saying goodbye at age 75, O'Connor shows you sides of the man and his methods that will surprise even the most dedicated Duke fan.

Basketball fans might feel as though they already know Coach K - or Mike Krzyzewski, the decades-long coach of the Duke Blue Devils who's set to retire after this season. In this insightful biography, sportswriter O'Connor captures the formative experiences and inner drive that catapulted the coach to icon status. Even the most die-hard fans will learn something.

New York Post sports columnist O'Connor (Belichick) delivers a standout definitive biography of Mike Krzyzewski, who led the Duke Blue Devils to five NCAA titles during his decades-long tenure as coach. Fashioning his fascinating account from interviews with Krzyzewski's friends and players, O'Connor begins with his subject's childhood in 1940s and '50s Chicago as 'the son of a cleaning lady' and a hoops fanatic ('I don't think I ever passed that schoolyard without seeing him playing basketball, ' one neighbor recalls). His persistence led him to captain the Army basketball team, under coach Bob Knight (as his 'much-better half on the court'), before eventually becoming coach himself, a stint which led to his joining Duke's basketball program in 1980. O'Connor takes a nuanced look at Krzyzewski's legendary career--from his experiences coaching All-Stars Kobe Bryant, Dwight Howard, and LeBron James during the 2008 Olympics to the many lives Krzyzewski impacted on and off the court. The coach's preternatural ability to 'motivate people to achieve things they did not believe they were capable of achieving' is inspiring, as is the arc that O'Connor paints of his life as 'a low-income street kid' who became 'the greatest college basketball coach of all time.' Fans won't want to miss this insightful look at a colossal figure in college sports.

Who would have guessed that the Chicago-born son of poor Polish immigrants with an unpronounceable surname would grow up to lead an elite private school to five national championships while amassing more than 1,000 wins and producing numerous NBA superstars? Even after a standout high school career that led to him playing for legendary coach Bob Knight at Army, Mike Krzyzewski (b. 1947) hardly seemed destined for superstardom. When Knight left for Indiana, however, Krzyzewski succeeded him and coached Army to some impressive victories, which won him an interview at Duke. Athletic Director Tom Butters chose Krzyzewski over far more qualified candidates. Though Krzyzewski didn't consent to be interviewed for this book, he didn't discourage anyone in his inner circle from speaking with New York Post columnist--and longtime ESPN writer--O'Connor, the author of biographies of Derek Jeter and Bill Belichick. O'Connor effectively leverages a broad cast of characters to chronicle Coach K's rocky start at Duke (Butters never wavered in his support); the critical role of his family, especially wife Mickie, in his life and his program; his rise to the apex of college basketball; his stint coaching USA men's basketball to three consecutive Olympic gold medals; and his fraught relationship with combustible mentor Knight. The author doesn't shy away from Krzyzewski's shortcomings: A fiery competitor, he can be petty and temperamental and has difficulty apologizing; as a tactician, he's not particularly innovative. O'Connor also probes the few occasions that the program has toed the line of impropriety and highlights how Coach K leverages every possible recruiting advantage (perhaps unfairly), such as getting NBA players like LeBron James to sing his praises. He also makes a powerful case for why Krzyzewski has achieved such immense success: He's an extraordinary communicator and motivator, brilliant organizer, and tireless worker who prioritizes family and team above all else. A sharpshooting account worthy of a champion.