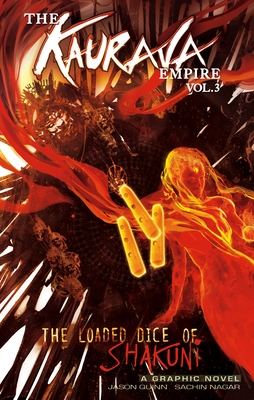 This is book number 13 in the Campfire Graphic Novels series.

The tales of the Mahabharata are updated in this new series from Campfire. Time and again the timeless nature of the greatest stories ever told have been highlighted by readers and fans. This space age rendering of these epic tales really proves the point. The Kauravas and Pandavas go high tech as their forces clash in the fiercest battle the universe has ever known.
In this volume we see the real puppet master behind the great war, Shakuni, the man who manoeuvred both sides into hating each other in order to satisfy a lifelong thirst for revenge against the Empire.

The greatest empire the universe has ever known. Ever expanding and seemingly impossible to resist. One man makes it his life-long mission to see that empire crumble into dust. Taken from his home as a child, forced to watch his father and loved ones starve to death before his very eyes, Shakuni vows to make those responsible pay for their actions. Slowly but surely he plots the destruction of everything they hold dear. Revenge will be his, at any cost, even if it means hurting those he cared for, because vengeance has no room for compassion. It is time to see how one man turned the Royal Family of the Kaurava Empire against each other and caused the spark that ignited the greatest civil war ever known.

Each volume in the series is a stand-alone adventure that will mesmerize and thrill readers everywhere.
Jason Quinn is the award winning author of Campfire's Steve Jobs: Genius by Design and Gandhi: My Life is My Message. He learned to read with Marvel Comics and was devastated when his teacher told him Spider-Man did not exist. He has worked in publishing for the last twenty years as an editor and writer, working on everything from Spider-Man to Barbie. He worked as Campfire's Creative Content Head from 2012 to 2014. His other Campfire titles include Little Alien, Genesis: From Creation to the Flood, The Beautiful Game and many others.
After completing his degree in computer applications, Sachin Nagar, a resident of New Delhi, India, strengthened his artistic skills by pursuing a diploma in animation, in which he made full use of his technological skills. A highly motivated artist, always seeking to excel, Sachin cites Michelangelo as his one great influence. His artwork for Campfire's Indian mythology titles Ravana and Sundarkaand has won him great acclaim among critics and comic enthusiasts alike. Gandhi, Mother Teresa, and Romeo and Juliet are some of the other titles he has illustrated for Campfire.