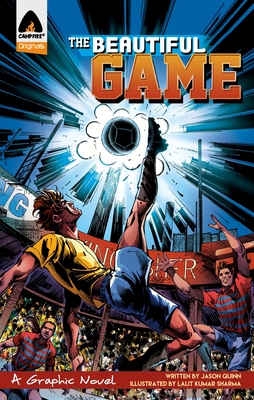 This is book number 9 in the Campfire Graphic Novels series.

A sports-themed Campfire Originals graphic novel by a veteran writer for Marvel comics and children's television.
Jason Quinn was born in Liverpool, England. He learned to read with Marvel Comics and was devastated when his teachers told him that Spider Man did not exist. He has worked for Marvel UK and Panini, editing and writing their Spectacular Spider Man comic, along with just about everything else from Barbie to Action Man. In 1998 he was voted 'Sportsman of the Year' by the Boars Head Soccer Club. He then moved to Pinewood Studios, England, home of the James Bond movies, where he worked in children's television, scripting and developing programs for kids.