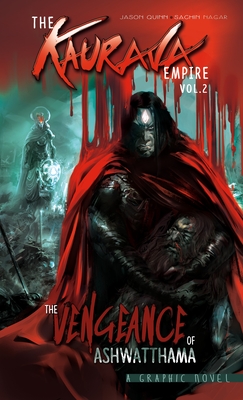 This is book number 12 in the Campfire Graphic Novels series.

The tales of the Mahabharata are updated in this new series from Campfire. Time and again the timeless nature of the greatest stories ever told have been highlighted by readers and fans. This space age rendering of these epic tales really proves the point. The Kauravas and Pandavas go high tech as their forces clash in the fiercest battle the universe has ever known.

Each volume in the series is a stand-alone adventure that will mesmerize and thrill readers everywhere.The Mahabharata goes science fiction in this graphic retelling of the war between the Pandavas and the Kauravas. Ashwatthama, a reluctant warrior commits the ultimate crime and must pay for it by wandering the universe, friendless and alone for all eternity. A graphic reminder that war can brutalize even the best of men and that revenge is seldom worth the price. Cursed to wander the universe, friendless, alone and in pain, Ashwatthama has eternity to ponder his crimes and to yearn for forgiveness. Can he escape his terrible past and find peace or will he be doomed to live forever?

In the second volume of Campfire's Kaurava Empire series we focus on the story of Ashwatthama, the son of great guru and weapons master Drona, teacher of the Kauravas and Pandavas. When war comes to the empire, Ashwatthama is reluctant to choose sides as he is friends with members of  both the Kaurava and Pandava families, but in the end he sides with his father, following him into battle against the Pandavas. When Drona is killed through trickery on the battlefield, Ashwatthama swears vengeance and his revenge is bloody and terrible.
Jason Quinn is the award winning author of Campfire's Steve Jobs: Genius by Design. He learned to read with Marvel Comics and was devastated when his teacher told him Spider-Man did not exist. He has worked in publishing for the last twenty years as an editor and writer, working on everything from Spider-Man to Barbie. He moved to India in 2012 and currently works as Campfire's Creative Content Head. The author lives in India.