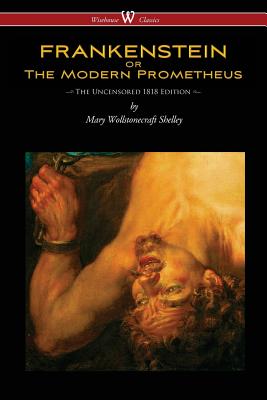 
Usually Ships in 1-5 Days
(This book cannot be returned.)
This is the Uncensored 1818 Edition FRANKENSTEIN; OR, THE MODERN PROMETHEUS, a novel written by the English author Mary Wollstonecraft Shelley about the young science student Victor Frankenstein, who creates a grotesque but sentient creature in an unorthodox scientific experiment. Shelley started writing the story when she was eighteen, and the novel was published when she was twenty. The first edition was published anonymously in London in 1818. Shelley's name appears on the second edition, published in France in 1823. Shelley had travelled through Europe in 1814, journeying along the river Rhine in Germany with a stop in Gernsheim which is just 17 km away from Frankenstein Castle, where, two centuries before, an alchemist was engaged in experiments. Later, she travelled in the region of Geneva (Switzerland)-where much of the story takes place-and the topic of galvanism and other similar occult ideas were themes of conversation among her companions, particularly her lover and future husband, Percy Shelley. Mary, Percy, Lord Byron, and John Polidori decided to have a competition to see who could write the best horror story. After thinking for days, Shelley dreamt about a scientist who created life and was horrified by what he had made; her dream later evolved into the novel's story.

Shelley completed her writing in May 1817, and Frankenstein; or, The Modern Prometheus was first published on 11 March 1818 by the small London publishing house of Lackington, Hughes, Harding, Mavor, & Jones. The second edition of Frankenstein was published on 11 August 1822 in two volumes (by G. and W. B. Whittaker) following the success of the stage play Presumption; or, the Fate of Frankenstein by Richard Brinsley Peake; this edition credited Mary Shelley as the author.

On 31 October 1831, the first "popular" edition in one volume appeared, published by Henry Colburn & Richard Bentley. This edition was heavily revised by Mary Shelley, partially because of pressure to make the story more conservative, and included a new, longer preface by her, presenting a somewhat embellished version of the genesis of the story. This edition tends to be the one most widely read now, although editions containing the original 1818 text are still published. Many scholars prefer the 1818 text, arguing that it preserves the spirit of Shelley's original publication.