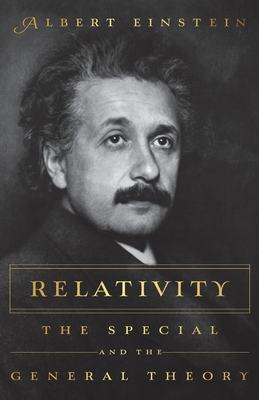 
Usually Ships in 1-5 Days
(This book cannot be returned.)
Along with quantum mechanics in the 1920s, Einstein's Special Theory of Relativity (1905) and General Theory of Relativity (1916) stand as the supreme achievements of twentieth-century physics. In simplest terms, the theory of Relativity is an approach to the measurement and study of space and time. The theory assumes that findings are based upon the relation of the frame of reference to the objects measured. The Special Theory of Relativity is primarily concerned with electric and magnetic phenomena. The General Theory focuses on gravity-not as a force as Newton postulated-but as a curved field in the space-time continuum, created by the presence of mass. Redesigned to present an easier reading, Relativity includes both explanatory illustrations and mathematical derivations of Einstein's theories. This book brings out the great scientist's remarkable ability to penetrate directly into the heart of the subject and yet remain lucid and accessible.