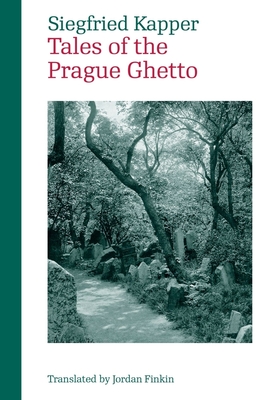 Trained in philosophy and medicine, the writer, translator, scholar, and political and cultural activist Siegfried Kapper (1821–1879) devoted significant effort to the advancement of Jewish culture in Bohemia, Jewish emancipation, and to the commitment of Jews to contemporary Czech society. The three stories in this collection, which first appeared in the press in the 1840s and were posthumously published as a collection at the end of the century, offer a Romantic and folkloric vision of Jewish culture in Prague.

The first story, “Genenda,” displays Kapper’s operatic eye for detail and drama with its account of a dutiful rabbi’s daughter being swept away by a dashing young man, a Christian nobleman disguised as a Jew. “The Curious Guest” is an intricate tale of a quest for wisdom and power. The final story, “Glowing Coals,” is a supernatural tale of romantic desire and revenge, displaying Kapper’s skill at deploying the tropes of folklore for dramatic literary effect. The collection not only provides a colorful snapshot of nineteenth-century Czech-Jewish culture but also resonates with universal human themes that transcend a single national experience.
Siegfried Kapper (1821–1879) was the nom de plume of Isaac Salomon Kapper, a Prague-born writer, journalist, politician, and physician. He wrote in both German and Czech, and is respected for his poetry and fairy tales.

. Jordan Finkin is the rare book and manuscript librarian at Hebrew Union College.