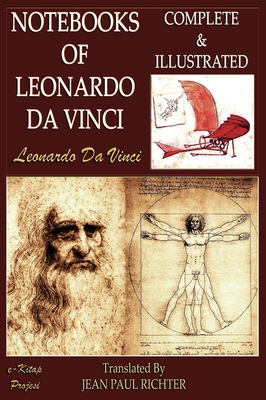 This new Great collection of his art and notes from Cheapest Books. Put together all notes and drawings of Da Vinci as found, not need reordered.

A singular fatality has ruled the destiny of nearly all the MOST FAMOUS OF LEONARDO DA VINCI'S WORKS. Two of the three most important were never completed, obstacles having arisen during his life-time, which obliged him to leave them unfinished; namely the Sforza Monument and the Wall-painting of the Battle of Anghiari, while the third--the picture of the Last Supper at Milan--has suffered irremediable injury from decay and the repeated restorations to which it was recklessly subjected during the XVIIth and XVIIIth centuries. Nevertheless, no other picture of the Renaissance has become so wellknown and popular through copies of every description.

Vasari says, and rightly, in his Life of Leonardo, "that he laboured much more by his word than in fact or by deed", and the biographer evidently had in his mind the numerous works in Manuscript which have been preserved to this day. To us, now, it seems almost inexplicable that these valuable and interesting original texts should have remained so long unpublished, and indeed forgotten. It is certain that during the XVIth and XVIIth centuries their exceptional value was highly appreciated. This is proved not merely by the prices which they commanded, but also by the exceptional interest which has been attached to the change of ownership of merely a few pages of Manuscript.

Leonardos literary labours in various departments both of Art and of Science were those essentially of an enquirer, hence the analytical method is that which he employs in arguing out his investigations and dissertations. The vast structure of his scientific theories is consequently built up of numerous separate researches, and it is much to be lamented that he should never have collated and arranged them. His love for detailed research--as it seems to me--was the reason that in almost all the Manuscripts, the different paragraphs appear to us to be in utter confusion; on one and the same page, observations on the most dissimilar subjects follow each other without any connection. A page, for instance, will begin with some principles of astronomy, or the motion of the earth; then come the laws of sound, and finally some precepts as to colour. Another page will begin with his investigations on the structure of the intestines, and end with philosophical remarks as to the relations of poetry to painting; and so forth.

Leonardo himself lamented this confusion, and for that reason I do not think that the publication of the texts in the order in which they occur in the originals would at all fulfil his intentions. No reader could find his way through such a labyrinth; Leonardo himself could not have done it.

Added to this, more than half of the five thousand manuscript pages which now remain to us, are written on loose leaves, and at present arranged in a manner which has no justification beyond the fancy of the collector who first brought them together to make volumes of more or less extent. Nay, even in the volumes, the pages of which were numbered by Leonardo himself, their order, so far as the connection of the texts was concerned, was obviously a matter of indifference to him. The only point he seems to have kept in view, when first writing down his notes, was that each observation should be complete to the end on the page on which it was begun.