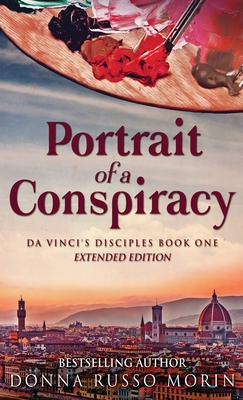 In 15th century Florence, five women and a legendary artist weave together a dangerous plot that could bring peace - or get them all killed.

Seeking to wrest power from the Medici, members of the Pazzi family slay the beloved Giuliano. But Lorenzo de' Medici survives the attack and seeks revenge on everyone involved, plunging the city into murderous chaos. Bodies are dragged through the streets, and no one is safe.

Five women steal away to a church to ply their craft in secret. Viviana, Fiammetta, Isabetta, Natasia and Mattea are painters, not allowed to be public with their skill but freed from the restrictions in their lives by their art. When a sixth member of their group, Lapaccia, goes missing and is rumored to have stolen a much sought-after painting before she vanished, the women must venture out into the dangerous streets to find their friend.

They will have help from one of the most renowned painters of their era: the peaceful and kind Leonardo da Vinci. It is under his tutelage that they flourish as artists and with his access that they infiltrate some of the highest, most secretive places in Florence, unraveling one conspiracy as they build another in its place.

Vibrant and absorbing, Portrait Of A Conspiracy is the first novel in Donna Russo Morin's Da Vinci's Disciples series.