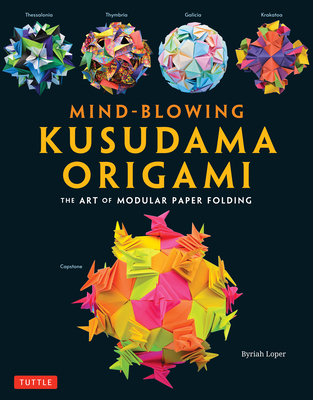 
Coming Soon - Available for Pre-Order Now
Discover the intricate world of modular Kusudama paper folding Kusudama are elaborate geodesic spheres assembled from many small folded pieces of paper. They were originally used to hold incense in Japanese Buddhist temples. Modern Kusudama consist of dozens of colorful papers folded and fitted together to form ornate spherical sculptures. In this exciting new book, master paper folder Byriah Loper presents 29 of his own original and spectacular Kusudama creations, including:
Assembling Kusudama is an exciting challenge, however Loper's clear diagrams and detailed, step-by-step photos and instructions make the art accessible to anyone even if you have no prior origami paper folding experience. And the astonishing finished pieces are well worth the effort.
Byriah Loper is an origami artist known for his spectacular modular works and pleated tessellations. His interest in origami began early with the discovery of a paper airplane calendar, which inspired him to try more complicated folding projects. Loper soon discovered modular origami and has since designed and folded over 1,000 original works. He was a featured artist in the Surface to Structure exhibition at the Cooper Union school in New York in 2014, the Origami Universe exhibition at the Chi Mei Museum in Taipei in 2016, and the Into the Fold exhibition at the Science Museum in Oklahoma City in 2018. He has been a guest instructor at the annual OrigamiUSA convention and the Origami Tsunami Convention, has presented and exhibited his work at various universities and has developed artworks for banks and private commissions. Byriah lives in Wilmore, Kentucky.