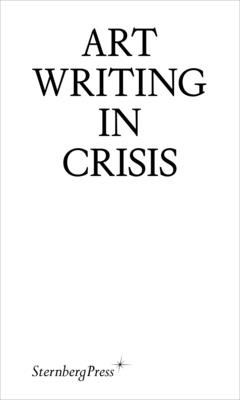 
Usually Ships in 1-5 Days
Texts by established and emerging writers who address the social and political dimensions of art and art writing in the contemporary context.

Fires burn around the world. Systemic discrimination persists, precarity is increasing, and the modern democratic project faces challenges from all sides. Art writing helps us to understand art, which in turn helps us to understand such crises. But art writing itself is in crisis. Newspapers and magazines offer fewer channels than ever for independent art criticism, persistent institutional biases exclude the positions of many, and a proliferation of platforms presents opportunities and challenges in equal measure. This volume presents writing by established and emerging writers who address the social and political dimensions of art and art writing in the contemporary context and the ways in which new art writing and publishing practices promote critical engagement among readerships as never before.
Brad Haylock is a designer, publisher, and academic who lives and works on the unceded lands of the people of the Woi wurrung and Boon wurrung language groups of the eastern Kulin Nations. He is an Associate Professor in the School of Design at RMIT University, where he is currently Coordinator of Higher Degrees by Research. He has edited and published numerous books, and has most recently coedited One and Many Mirrors: Perspectives on Graphic Design Education and Distributed. Megan Patty is Head of Publications, Photographic Services and Library at the National Gallery of Victoria, Melbourne, Australia, and is founding Curator of the Melbourne Art Book Fair. She has edited numerous publications including She Persists: Perspectives on Women in Art & Design, The Centre: On Art & Urbanism in China, Some Posters from the NGV, and NGV Triennial (2017).