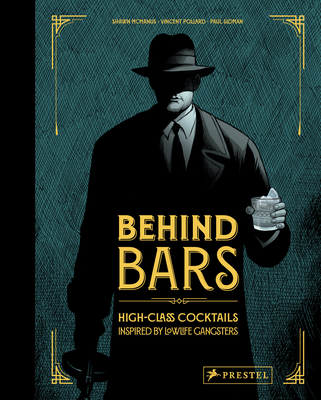 
Email or call for price
Pairing notorious gangsters and mobsters from movies and television with signature cocktails, this pocket-sized collection of boozy recipes is so much fun, it's criminal.

It's been a century since the prohibition sent Americans scurrying to speakeasies and decades since the movie industry turned mobsters into celebrities. Now the two worlds collide in this highly original collection that creates signature cocktails for gangsters of every stripe. There's Tommy Shelby, who likes his Irish whiskey strong and stiff with just a splash of sweet vermouth and bitters. Billie Frechette mixes gin with honey and lemon, making the drink almost as sweet as her love for John Dillinger. There's also Mia Wallace, who gets a boozy take on a classic milkshake. Famous characters from much-loved recent TV series including The Sopranos, Peaky Blinders, and Boardwalk Empire are seen alongside iconic roles from classic films such as The Godfather, Goodfellas, Scarface, and Miller's Crossing. Each character and drink is illustrated by acclaimed comic book artist Shawn McManus. Whether you're a budding mixologist or gearing up to watch The Godfather, this handy book provides the perfect blend of slick recipes and popular culture.
VINCENT POLLARD is an award-winning mixologist and gin distiller who has written about cocktails and the alcohol industry for trade and general publications, including Vice. He lives in Bogota, Colombia.

SHAWN MCMANUS is a Brooklyn-based comic book illustrator. He has worked extensively over three decades for DC Comics and other companies, notably for DC's Vertigo imprint including the Fables series. McManus has worked on stories such as Legends of the Dark Knight and was previously nominated for a prestigious Jack Kirby graphic novel award.