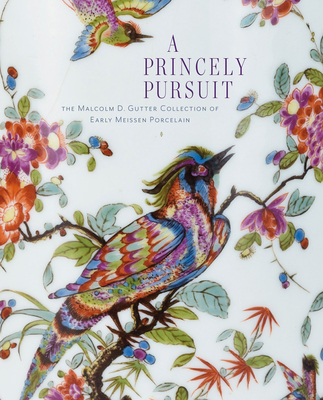 
Email or call for price
Through tremendous grit and research, Malcolm D. Gutter has been forming a remarkable porcelain collection over several decades, primarily on a professor’s salary. A Princely Pursuit presents more than one hundred significant pieces from the collection, which focuses primarily on early Meissen, particularly the royal collection that Augustus II (1670 – 1733) commissioned for the Japanisches Palais, his pleasure palace in Dresden, and the porcelain works he had imported from China and Japan.

In addition to reproducing many documented pieces from the royal collection, this volume includes numerous “collector’s stories” which capture, in Gutter’s own voice, his determined and painstaking hunt for Meissen porcelain around the world, as well as the legendary figures he has met and worked with along the way.  Pairing Meissen history with exemplary objects from the German manufactory, A Princely Pursuit makes an essential contribution to the field of decorative arts.
Maria Santangelo is curator of fine arts for Ann and Gordon Getty.

“The stories [Malcolm Gutter] so generously shares in this volume highlight what it is to be a true collector—the victories, the defeats and most importantly the ‘kismet’ when an object and collector eventually come together because that is the right outcome.”
— Tim Forrest's E & A