Sustainable Transportation Options for the 21st Century and Beyond: A Comprehensive Comparison of Alternatives to the Internal Combustion Engine (Hardcover) 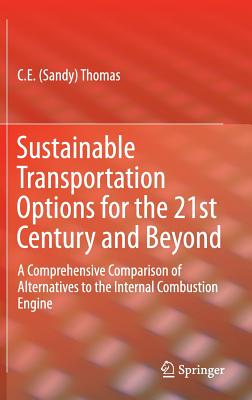 Sustainable Transportation Options for the 21st Century and Beyond: A Comprehensive Comparison of Alternatives to the Internal Combustion Engine (Hardcover)

The author has been engaged in scientific research for over 50 years. He has been actively engaged in the computer simulation and modelling of alternative vehicles since he directed an evaluation of hydrogen-powered fuel cell electric vehicles for the Ford Motor Company and the U.S. Department of Energy beginning in 1993. He was a founder and President of a start-up company, H2Gen Innovations, Inc. of Alexandria, Virginia from 2001 to 2009. H2Gen demonstrated the economic viability of producing hydrogen on-site for refuelling fuel cell electric vehicles. Dr. Thomas has co-authored 11 major technical reports, published six peer-reviewed articles and made more than 25 technical presentations comparing alternative vehicles at various national and international scientific conferences. He was a former Vice Chairman, Director and member of the Executive Committee of the National Hydrogen Association. Dr. Thomas won the prestigious Jules Verne Award from the International Association of Hydrogen Energy in 2010. The award included the inscription: "For his leadership in systems studies, analyses, and entrepreneurship in development and commercialization of hydrogen technologies." He has been awarded 11 U.S. patents in the fields of coherent optical data processing and laser fusion.