René Hubert: The Man Who Dressed Filmstars and Airplanes (Paperback) 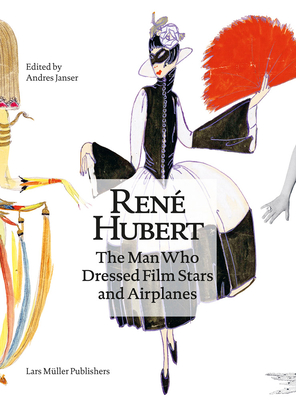 René Hubert: The Man Who Dressed Filmstars and Airplanes (Paperback)

From the 1920s to the 1960s, Ren Hubert (1895-1976) belonged to the cr me de la cr me of costume designers. He designed costumes for stars such as Tallulah Bankhead, Ingrid Bergman, Marlon Brando, Yul Brynner, Marlene Dietrich, Vivien Leigh, Laurence Olivier and Marilyn Monroe in one of her first roles. Shirley Temple danced the Hula in the film Curly Top wearing a grass skirt ensemble designed by Hubert; he was especially closely associated with Gloria Swanson, who encouraged him to relocate to Los Angeles when she met him in Paris in 1924. Hubert consented, and soon found himself working with directors Ren Claire, Alfred Hitchcock and Otto Preminger, elevating their stars with his flair for opulent color and elegant lines.
Hubert's international reputation helped him to win commissions in his native Switzerland, most notably for the Swiss National Exhibition in 1939, for Swissair uniforms and aircraft interiors, and for various theaters and textile companies.
This richly illustrated publication compiles sketches, costume photography, stage photos and film still of Hubert's work. Experts from both sides of the Atlantic reflect on his multifaceted oeuvre at his numerous workplaces in Switzerland, Europe and the US. Excerpts from his unpublished memoirs provide a personal view of his life and the glamor of the era.