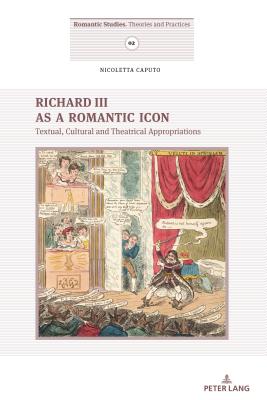 This valuable volume adopts a multi-perspective approach to the historical and dramatic figure of Richard III during the long Romantic period. It takes into consideration his controversial reputation among historians of the time, as well as his changing place within the critical literature. It likewise examines nineteenth-century adaptations of Shakespeare's play. Above all, Nicoletta Caputo's innovative book discusses contrasting stage interpretations of Richard as dramatis persona, in the performances of such iconic players as David Garrick, George Frederick Cooke and Edmund Kean. The vivid overall picture that emerges of Richard III is that of a figure who exerts an almost inexhaustible fascination on the Romantics. Nicoletta Caputo persuasively illustrates ̶ on the basis of abundant documentary evidence ̶ the surprising degree to which Richard is to be found at the very centre of the literary, theatrical, ideological and ethical debates, over a period of several decades. Such extraordinary centrality in turn sheds light on Romantic culture at large, and in particular on its understanding of Shakespeare, grounded above all in character analysis, often of a moral and political nature. The Romantics tended to reify Shakespeare's villainous king, extrapolating him from his dramatic context, and turning him into an autonomous, virtually living person.

Nicoletta Caputo is a researcher at the University of Pisa. She holds a PhD in English Studies and has been Folger Shakespeare Library Fellow. She has published articles and a volume on Tudor drama (Playing with Power, 1998); essays on nineteenth-century stage history and on contemporary English theatre and fiction, as well as a monograph on Angela Carter's Nights at the Circus (New Wine in Old Bottles, 2010).