Super Mad at Everything All the Time: Political Media and Our National Anger (Paperback) 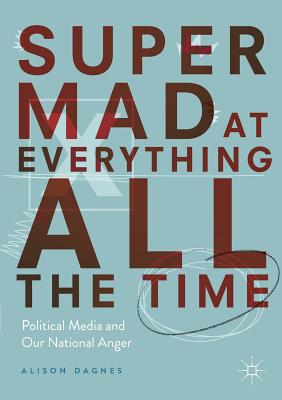 Super Mad at Everything All the Time: Political Media and Our National Anger (Paperback)

Super Mad at Everything All the Time explores the polarization of American politics through the collapse of the space between politics and culture, as bolstered by omnipresent media. It seeks to explain this perfect storm of money, technology, and partisanship that has created two entirely separate news spheres: a small, enclosed circle for the right wing and a sprawling expanse for everyone else. This leads to two sets of facts, two narratives, and two loudly divergent political sides with extraordinary anger all around. Based on extensive interviews with leading media figures and politicos, this book traces the development of the media machine, giving suggestions on how to restore our national dialogue while defending our right to disagree agreeably.

​Alison Dagnes is Professor of Political Science at Shippensburg University, USA. She is the author of A Conservative Walks Into a Bar: The Politics of Political Humor (Palgrave Macmillan, 2012) and Politics on Demand: The Effects of 24 Hour News on American Politics. She is a former C-SPAN producer and is frequently interviewed in the national & international press about American politics and political media.