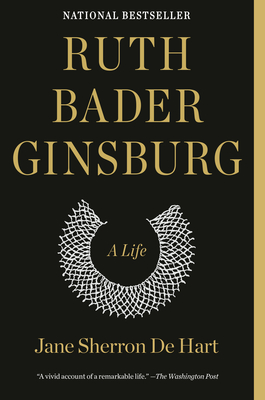 In this comprehensive, revelatory biography—fifteen years of interviews and research in the making—historian Jane Sherron De Hart explores the central experiences that crucially shaped Ginsburg’s passion for justice, her advocacy for gender equality, and her meticulous jurisprudence.

At the heart of her story and abiding beliefs is her Jewish background, specifically the concept of tikkun olam, the Hebrew injunction to “repair the world,” with its profound meaning for a young girl who grew up during the Holocaust and World War II.

Ruth’s journey begins with her mother, who died tragically young but whose intellect inspired her daughter’s feminism. It stretches from Ruth’s days as a baton twirler at Brooklyn’s James Madison High School to Cornell University to Harvard and Columbia Law Schools; to becoming one of the first female law professors in the country and having to fight for equal pay and hide her second pregnancy to avoid losing her job; to becoming the director of the ACLU’s Women’s Rights Project and arguing momentous anti-sex discrimination cases before the U.S. Supreme Court.

All this, even before being nominated in 1993 to become the second woman on the Court, where her crucial decisions and dissents are still making history. Intimately, personably told, this biography offers unprecedented insight into a pioneering life and legal career whose profound mark on American jurisprudence, American society, and our American character and spirit will reverberate deep into the twenty-first century and beyond.

REVISED AND UPDATED WITH A NEW AFTERWORD
Jane Sherron De Hart is professor emerita of history at the University of California, Santa Barbara. She lives in Santa Barbara, California.

“Readable and rewarding. . . . Ginsburg is a true-blue legal icon.”
—NPR

“In a revealing new biography, 15 years in the making, Jane Sherron De Hart helps untangle the mystery of the decorous Ginsburg as feminist gladiator.”
—The Atlantic

“An in-depth biography of the Supreme Court justice who has become a pop-culture icon.”
—USA Today

“De Hart’s thorough biography relates this life story with a nice sense of the sweep of feminist and legal history that is contained within it.”
—Minneapolis Star Tribune

“Monumental. . . . The first comprehensive biography of Ruth Bader Ginsburg. . . . De Hart excels in explaining the majority opinions, and later the dissents, in which she participated with remarkable clarity, illuminating the issues, the competing positions, and the significance of each in language easily grasped by readers with no legal training.”
—Kirkus Reviews (starred review)

“De Hart’s great strength is her ability to explain Ginsburg's cases and the legal strategies she employed. . . . An insightful, fascinating, and admiring biography of one of America’s most extraordinary jurists.”
—Publishers Weekly

“Passionate and thorough. . . . A major event in scholarship on American law.”
—Washington Monthly

“Magisterial and timely. . . . Written in clear language and grounded in historical context.”
—The Forward

“Compelling. . . . De Hart succeeds in showing us that the 107th person to be appointed to the Supreme Court is much more than a pop culture icon.”
—Jewish Journal

“De Hart displays an impressive grasp of each area of Ginsburg’s legal influence, from women’s rights to voting rights to gay rights to immigrant rights, with a particular focus on striking down laws that discriminated on the basis of gender.”
—Newsweek