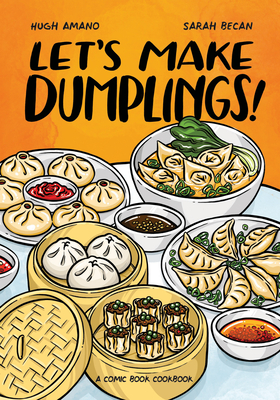 
Usually Ships in 1-5 Days
An accessible and easy-to-follow comic book cookbook for bringing Asian dumplings into the home kitchen, with recipes for savory and sweet dumplings, dipping sauces, riffs, and more—from the authors of Let’s Make Ramen!

Chef Hugh Amano and comics artist Sarah Becan invite you to explore the big little world of Asian dumplings! Ideal for both newbies and seasoned cooks, this comic book cookbook takes a fun approach to a classic treat that is imbued with history across countless regions. From wontons to potstickers, buuz to momos, Amano’s expert guidance paired with Becan’s colorful and detailed artwork prove that intricate folding styles and flavorful fillings are achievable in the home kitchen.

Let’s Make Dumplings! includes dumpling lore; a master folding guide that familiarizes readers with popular styles, like the pleated crescent of a potsticker or the 4-pointed star of a crab rangoon; and a series of cooking directions to choose from, such as steaming or pan-frying. The recipes range from savory Gyoza to sweet Cambodian Num Kom; from classic Baozi to riffs such as Sesame Chicken Dumplings.

Whether it is the family-style eating experience of stacked steamer baskets filled with succulent shumai and plump xiaolongbao or the interactive process of working together to fold hundreds of jiaozi for a celebration, Let’s Make Dumplings! captures the deep level of connection that dumplings bring to any gathering and shows you how to re-create it in your own home.
Hugh Amano’s devotion to exploring food and culture has taken him around the world, enriching his experience as a chef and writer. A graduate of the University of Colorado and New England Culinary Institute, he lives in Chicago, where the roster of dough-encased foods runs deep. He co-authored Let’s Make Ramen! and The Adventures of Fat Rice, and he always puts out a big batch of gyoza for his annual New Year’s Eve dinner party.

Sarah Becan has been drawing comics since she was very small. Her food-based autobiographical webcomic “I Think You’re Sauceome” sparked a love of food and culinary illustration, and her work has since appeared in various publications, including Saveur, Eater, Chicago magazine, and Chicago’s Reader newspaper. Her first graphic novel, The Complete Ouija Interviews, was a recipient of a Xeric award, and she illustrated Let’s Make Ramen! and The Adventures of Fat Rice. Currently residing in Chicago, she would be very happy to do nothing but draw food all day.
“Hugh and Sarah’s passion and expertise spill off the page. Every panel is filled with smart writing, vibrant color, and no small amount of gluten. An excellent, easy-to-follow guide through the ‘world of tasty fillings encased in chewy wrappers.’ It’s the most delicious comic I’ve ever read.”—Stephen McFeely, screenwriter, Avengers: Endgame

“This is one of the best guides to dumpling making—such a joyous, friendly book, full of a wealth of knowledge! Dumplings can feel so intimidating to make at home, but the clear, encouraging instructions and gorgeous step-by-step illustrations in Let’s Make Dumplings! make even the most intricate folding techniques totally approachable.”—Helen Rosner, food correspondent, The New Yorker

“This terrific book is perfect for anyone obsessed with stuffed doughy morsels!”—Andrea Nguyen, James Beard Award–winning author, The Pho Cookbook and Asian Dumplings