On Faith: Lessons from an American Believer (Hardcover) 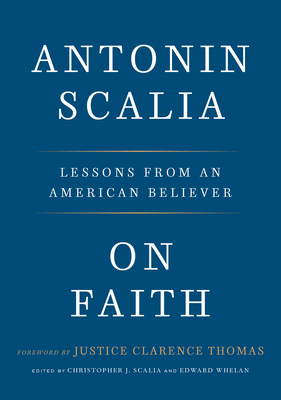 On Faith: Lessons from an American Believer (Hardcover)


Usually Ships in 1-5 Days
On Faith is an inspiring collection of the late Supreme Court justice Antonin Scalia's reflections on his own faith, on the challenges that religious believers face in modern America, and on the religious freedoms protected by the Constitution. Featuring a personal introduction by Justice Scalia's son Father Paul Scalia, this volume will enrich every reader's understanding of the legendary justice.

Antonin Scalia reflected deeply on matters of religion and shared his insights with many audiences over the course of his remarkable career. As a Supreme Court justice for three decades, he vigorously defended the American constitutional tradition of allowing religion a prominent place in the public square. As a man of faith, he recognized the special challenges of living a distinctively religious life in modern America, and he inspired other believers to meet those challenges.

This volume contains Justice Scalia's incisive thoughts on these matters, laced with his characteristic wit. It includes outstanding speeches featured in Scalia Speaks and also draws from his Supreme Court opinions and his articles. In addition to the introduction by Fr. Scalia, other highlights include Fr. Scalia's beautiful homily at his father's funeral Mass and reminiscences from various friends and law clerks whose lives were influenced by Antonin Scalia's faith.
ANTONIN GREGORY SCALIA was born on March 11, 1936, in Trenton, New Jersey, the only child of Eugene and Catherine Scalia. In 1982, President Reagan nominated Scalia to join the U.S. Court of Appeals for the District of Columbia Circuit. Four years later, Reagan nominated him to the Supreme Court of the United States, to which he was confirmed by the Senate, 98- 0. Justice Scalia took his seat on the bench on September 26, 1986. As a Supreme Court justice, Scalia articulated and exercised the interpretive methods of originalism and textualism. He established himself as a forceful presence on the bench, a vivid and compelling writer, and a gregarious public presence. One of the most significant justices in the history of the Court, he served for nearly thirty years before his death on February 13, 2016. Antonin Scalia was married to Maureen for fifty- five years. Together they had nine children and dozens of grandchildren. He was a loving husband, a devoted father, a devout Catholic, and a proud American.

CHRISTOPHER J. SCALIA, the eighth of Justice Scalia's nine children and a former professor of English, works at a public relations firm near Washington, DC. His book reviews and political commentary have appeared in The Wall Street Journal, The Washington Post, The Weekly Standard, and elsewhere. He lives in Virginia with his wife and three children.

EDWARD WHELAN, president of the Ethics and Public Policy Center, is a former law clerk to Justice Scalia. He is a leading commentator on the Supreme Court and on issues of constitutional law. A father of four, he lives with his family in the DC area.

“A remarkable meditation on the nature of religious faith and its relationship to the world of affairs.”—The University Bookman