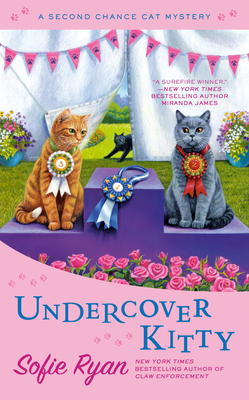 This is book number 8 in the Second Chance Cat Mystery series.

Sarah and Elvis can always be found at a charming secondhand shop in the village of North Harbor, Maine. Despite the small-town setting, the daring duo often find themselves wrapped up in murder, but luckily they have help--a quirky group of senior citizens runs an amateur detective agency called Charlotte's Angels out of the store.

The Angels are hired to look into who is sabotaging cat shows in the state, and they decide the best way to do that is to send Elvis the cat undercover as a contestant. But then one of the cat show volunteers is murdered just before the latest competition, and Sarah and the Angels have to catch a killer in two shakes of a cat's tail!
Sofie Ryan is the author of the New York Times bestselling Second Chance Cat Mysteries. She also writes the New York Times bestselling Magical Cats Mystery series under the name Sofie Kelly.

"Sure to appeal to anyone who loves a combination of felonies and felines."--Richmond Times-Dispatch

"Ryan kicks off the new Second Chance Cat Mystery series with a lot of excitement. Her small Maine town is filled with unique characters. . . . This tale is enjoyable from beginning to end; readers will look forward to more."--RT Book Reviews

“Cleverly planned and flawlessly executed…Full of humor, cat antics, intrigue and suspense…The best of both worlds for those who love cats and cozy mysteries.”—Open Book Society

“Excellently written, and as always, I am eager to return to my friends in this series.”—Bibliophile