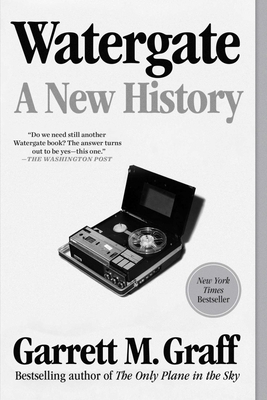 
Coming Soon - Available for Pre-Order Now
NEW YORK TIMES BESTSELLER * “Do we need still another Watergate book? The answer turns out to be yes—this one.” —The Washington Post * “Dazzling.” —The New York Times Book Review

From the New York Times bestselling author of The Only Plane in the Sky, comes the first definitive narrative history of Watergate—“the best and fullest account of the crisis, one unlikely to be surpassed anytime soon” (Kirkus Reviews, starred review)—exploring the full scope of the scandal through the politicians, investigators, journalists, and informants who made it the most influential political event of the modern era.

In the early hours of June 17, 1972, a security guard named Frank Wills enters six words into the log book of the Watergate office complex that will change the course of history: 1:47 AM Found tape on doors; call police.

The subsequent arrests of five men seeking to bug and burgle the Democratic National Committee offices—three of them Cuban exiles, two of them former intelligence operatives—quickly unravels a web of scandal that ultimately ends a presidency and forever alters views of moral authority and leadership. Watergate, as the event is called, becomes a shorthand for corruption, deceit, and unanswered questions.

Now, award-winning journalist and bestselling author Garrett M. Graff explores the full scope of this unprecedented moment from start to finish, in the first comprehensive, single-volume account in decades.

The story begins in 1971, with the publication of thousands of military and government documents known as the Pentagon Papers, which reveal dishonesty about the decades-long American presence in Vietnam and spark public outrage. Furious that the leak might expose his administration’s own duplicity during a crucial reelection season, President Richard M. Nixon gathers his closest advisors and gives them implicit instructions: Win by any means necessary.

Within a few months, an unsteady line of political dominoes are positioned, from the creation of a series of covert operations code-named GEMSTONE to campaign-trail dirty tricks, possible hostage situations, and questionable fundraising efforts—much of it caught on the White House’s own taping system. One by one they fall, until the thwarted June burglary attracts the attention of intrepid journalists, congressional investigators, and embattled intelligence officers, one of whom will spend decades concealing his identity behind the alias “Deep Throat.” As each faction slowly begins to uncover the truth, a conspiracy deeper and more corrupt than anyone thought possible emerges, and the nation is thrown into a state of crisis as its government—and its leader—unravels.

Using newly public documents, transcripts, and revelations, Graff recounts every twist with remarkable detail and page-turning drama, bringing readers into the backrooms of Washington, chaotic daily newsrooms, crowded Senate hearings, and even the Oval Office itself during one of the darkest chapters in American history.

Grippingly told and meticulously researched, Watergate is the defining account of the moment that has haunted our nation’s past—and still holds the power to shape its present and future.
Garrett M. Graff, a distinguished journalist and bestselling historian, has spent more than a dozen years covering politics, technology, and national security. Today, he serves as the director of cyber initiatives for The Aspen Institute and is a contributor to Wired, CNN, and Politico. He’s written for publications from Esquire to Rolling Stone to The New York Times, and edited two of Washington’s most prestigious magazines, Washingtonian and Politico. Graff is the author of multiple books, including The Threat Matrix, the national bestseller Raven Rock, and the New York Times bestseller The Only Plane in the Sky.

PRAISE FOR WATERGATE: A NEW HISTORY

“Do we need still another Watergate book? The answer turns out to be yes — this one: Garrett M. Graff’s Watergate: A New History. It is a remarkably rich narrative with compelling characters, who range from criminal and flawed to tragic and heroic. As someone who played a small role in the drama while I was editing many of The Washington Post’s Watergate stories, I found that Graff convincingly populates and re-creates an extraordinary time in the history of the country and this city. ... fast-paced ... filled with apt sketches of its many characters, major and minor, from all the president’s men, and some of their spouses, to journalists, investigators, lawyers and members of Congress. It vividly re-creates all the key events, from Nixon’s overreaction to the revelation of the Pentagon Papers about the Vietnam War in June 1971 to his resignation in August 1974.... engaging, informative and thought-provoking, more than earning its place on bookshelves alongside the old histories.” —Len Downie, Jr., The Washington Post

“Award-winning author Graff aims to give readers the full scope of Watergate — a much bigger, more bizarre story than even remembered — telling the full story from start to finish in this ambitious book.” —New York Post

“A definitive, exhaustive account of the scandal. . . a fascinating, horrifying examination of the Nixon presidency up close—enough to scare the record straight.” —AirMail

“A meticulously researched, expansive history of the Watergate scandal from start to finish, from the release of the Pentagon Papers in 1971 to the reverberations that echo through present day.” —Barbara VanDenburgh, USA TODAY

“A brisk, riveting, compulsively readable, comprehensive, up-to-date narrative of the entire tangled affair, and it's hard to imagine it better told. . . . Now the best and fullest account of the Watergate crisis, one unlikely to be surpassed anytime soon.” —Kirkus Reviews (starred review)

“Monumental. . . effortlessly clarifies the strands of one of the most complex episodes in modern history. . . A masterful, epic look at a story that is still barely believable.” —The Daily Mail

“This meticulously researched and documented book should now become the definitive source for those who wish to dive into the cesspool of deceit, intrigue and criminal behavior that were associated with the seemingly innocuous break-in and the cover-up. ... [Graff] makes a valiant attempt to connect all the disparate threads from the confusing tapestry of multiple investigations, muffled tapes and self-serving memoirs available. His organization of the book makes the 700-plus pages flow seamlessly as the investigators reach their inevitable conclusions. In summary, this book should be required reading for any citizen with the faintest interest in how the sausage-factory of Washington politics functions and how our country has managed to arrive at today’s dysfunctional impasse.” —J. Kemper Campbell, Lincoln Journal-Star

“Garrett Graff aptly calls Watergate a 'Gordian knot of scandal.' This comprehensive, searching, yet elegant book untangles it more completely than any attempt so far. I learned a lot!” —Rick Perlstein, bestselling author of Nixonland and Reaganland

“Watergate is one of the great tragic double-edged swords of modern American history: its crimes were swiftly exposed, the criminals punished, the rule of law restored––and it profoundly, permanently undermined American citizens' trust in their government. Garrett Graff's fresh chronicle of that inflection point is lucid, enlightening and indispensable.” —Kurt Andersen, author of Evil Geniuses and writer-host of Nixon at War

“Expertly researched and assembled, this is a valuable introduction to one of history’s greatest political scandals. . . . Graff skillfully interweaves the perspectives of journalists and law enforcement officials investigating the Watergate break-in with the Nixon team’s attempts to “use the organs of government to cover up their own rogue operation,” and incisively analyzes how the congressional inquiry into the scandal resulted in Democrats and Republicans coming together to uphold the Constitution and limit the powers of the president.” —Publishers Weekly