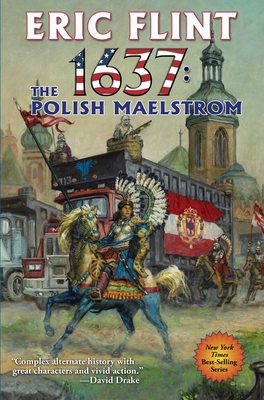 This is book number 26 in the Ring of Fire series.

SOLO NOVEL BY ERIC FLINT IN THE BEST-SELLING RING OF FIRE SERIES!

The Ottoman Empire has captured Vienna and is now laying siege to the Austrian government-in-exile established in the city of Linz. Both the United States of Europe and the Kingdom of Bohemia have come to Austria’s assistance, but everyone knows this is going to be a long and brutal struggle.

In order to relieve the pressure on the Austrians, General Mike Stearns proposes to open a second front in the Levant. The USE’s emperor Gustavus Adolphus gives his approval to the plan, and Mike sets it in motion, with the very capable assistance of his wife Rebecca Abrabanel, now the USE’s Secretary of State.

Meanwhile, Poland is coming to a boil. Gretchen Richter, the newly elected chancellor of Saxony, has seized control of Lower Silesia. Her small army is now approached to form an alliance with the Polish revolutionaries who have seized power in the Ruthenian province of Galicia—which, in the universe the time-displaced Americans of Grantville came from, would have constituted the western Ukraine.

Now, the Bohemians send an army led by Morris Roth into Poland, ostensibly to aid the revolutionaries but also with the goal of expanding King Albrecht Wallenstein’s growing empire in eastern Europe. And—the icing on the cake—Mike Stearns sends the Hangman Regiment of his Third Division under the command of Jeff Higgins to reinforce Jeff’s wife Gretchen in Silesia.

Will it drag all its displaced Americans and their allies down with it?

“ [R]eads like a technothriller set in the age of the Medicis . . . ”—Publishers Weekly
Eric Flint is a modern master of alternate history fiction, with 3 million books in print. He’s the author/creator of the multiple New York Times best-selling Ring of Fire series, starting with first novel 1632. With David Drake he has written six popular novels in the “Belisarius” alternate Roman history series, and with David Weber, he has collaborated on 1633 and 1634: The Baltic War, as well as four novels in Weber’s Honorverse series. Flint was for many years a labor union activist. He lives near Chicago, Illinois.