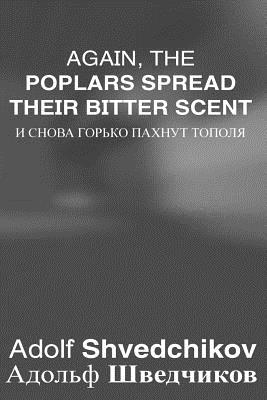 
Usually Ships in 1-5 Days
(This book cannot be returned.)
Bilingual English & RussianAuthor Adolf Shvedchikov & TranslatorAgain, The Poplars Spread Their Bitter Scent is a beautiful book of poetry in English and Russian. Translated by the author himself.Over the past 20 years, his poetic work became well known in Russia and abroad thanks to numerous publications. His poems systematically appear in various Anthologies and are published in the journals New Literature (Russia), Libelle (France), Pluma y tintero (Spain), Episteme, Our Poetry Archive (India), The World Poets Quarterly (China). Recently in Germany were published 5 books of his poetry: Jungle of Love, Crooked Mirrors of Imagination, Unknown eternal chains, the time has come to sum up, River of Life.Adolf Shvedchikov is a romantic poet. He is the master of love lyrics. But for him, love lyrics are not an independent goal. He tries to understand the whole spectrum of relationships between a man and a woman, to find the secret of a harmonic world in the categories of love.A great place in the poet's work is the theme of the relationship between a person and the world around him. He tries to find the philosophical meaning of life and wants to understand what human capabilities are in a relatively short time of his existence. I want to believe that this book can be of interest to the English-speaking and Russian-speaking readers.Gary Drury Publishing is Publisher of this TITLE.
Adolf Pavlovich Shvedchikov Russian scientist, poet and translator Born May 11, 1937 in Shakhty, Russia. In 1960 he graduated from Moscow State University, Department of Chemistry. Ph.D. in Chemistry in 1967. Senior researcher at the Institute of Chemical Physics, Russian Academy of Sciences, Moscow. Since 1997 - the chief chemist of the company Pulsatron Technology Corporation, Los Angeles, California, USA. Doctor of Literature World Academy of Arts and Letters. He published more than 150 scientific papers and about 600 of his poems in different International Magazines of poetry in Russia, USA, Brazil, India, China, Korea, Japan, Italy, Malta, Spain, France, Greece, England and Australia. He published also 22 books of poetry. His poems have been translated into Italian, Spanish, Portuguese, Greek, Chinese, Japanese, and Hindi languages. He is the Member of International Society of Poets, World Congress of Poets, International Association of Writers and Artists, A. L. I. A. S. (Associazione Letteraria Italo-Australiana Scrittori, Melbourne, Australia). Adolf P. Shvedchikov is known also for his translation of English poetry ("150 English Sonnets of XVI-XIX Centuries." Moscow. 1992. "William Shakespeare. Sonnets." Moscow. 1996) as well as translation of many modern poets from Brazil, India, Italy, Greece, USA, England, China and Japan. In 2013 he was nominated for the Nobel Prize for Literature.