The Unconstitutionality of Slavery (Paperback) 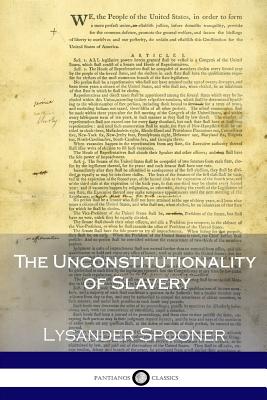 By Lysander Spooner
$6.79
Email or call for price

Lysander Spooner was a staunch abolitionist, who felt that the slavery of black peoples to be an immoral disgrace that stands in stark opposition to the Constitution of the United States.
This work presents the opinions of the author in a cogent and sequential fashion, beginning with the simple question - "What is law?"
For Spooner, the legality of slavery was in doubt from the inception of the Constitution. The subsequent Bill of Rights, to his mind, erased all notion that slavery was in any way legal or tolerable in the United States of America. The idea that some men could be free while others were deprived of that status is abhorrent to the author, who is determined to use logic to prove the truth of his points.
This book contains a close analysis of the passages the Founding Fathers composed in the U.S. Constitution. Though mentions and provisions of slavery exist, they are - in Spooner's view - cancelled by the subsequent Bill of Rights. For the author, the U.S. government had unlawfully deprived the enslaved populations of their rights.
Unique for his opposition both to slavery and to the American Civil War, Lysander Spooner was one of the best-known radicals of his time. Anti-authoritarian and in favor of civil rights, it was after the war became a bitter and bloody conflict that he turned against it as a solution. Spooner in his time was most famous for his success in challenging the postal monopolies - this victory led delivery prices in the continental USA to plummet almost overnight.