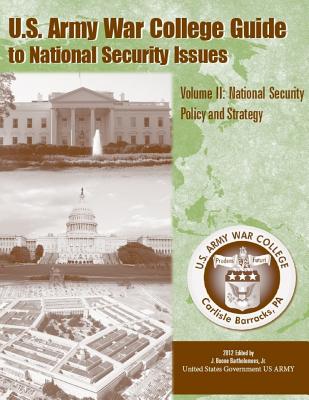 By United States Government Us Army


Email or call for price
U. S. Army War College Guide To National Security Issues Volume II: National Security Policy And Strategy 2012 This edition of the U. S. Army War College Guide to National Security Policy and Strategy continues to reflect the structure and approach of the core national security strategy and policy curriculum at the War College. The fifth edition is published in two volumes that correspond roughly to the Department of National Security and Strategy's core courses: "Theory of War and Strategy" and "National Security Policy and Strategy." Like previous editions, this one is based on its predecessor but contains both updates and new scholarship. Over a third of the chapters are new or have undergone significant rewrites. Many chapters, some of which appeared for years in this work, have been removed. Nevertheless, the book remains unchanged in intent and purpose. Although this is not primarily a textbook, it does reflect both the method and manner we use to teach strategy formulation to America's future senior leaders. The book is not a comprehensive or exhaustive treatment of either strategic theory or the policymaking process. Both volumes are organized to proceed from the general to the specific. Thus, the first volume opens with general thoughts on the nature and theory of war and strategy, proceeds to look at the complex aspect of power, and concludes with specific theoretical issues. Similarly, the second volume begins by examining the policy/strategy process, moves to a look at the strategic environment, and concludes with some specific issues. This edition continues the effort begun in the fourth edition to include several short case studies to illustrate the primary material in the volume.