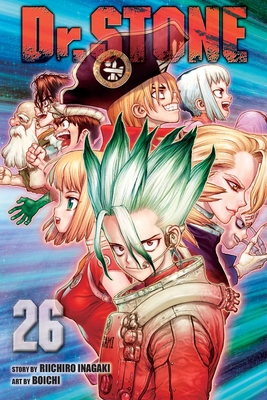 This is book number 26 in the Dr. STONE series.

Thousands of years after humanity was petrified, Senku has reached that final frontier his own father once traversed—outer space! Unfortunately, the moon mission runs into a sudden, unexpected crisis. Who or what is Why-Man’s true identity? And what fate awaits humanity? The science-powered adventure comes to its dramatic conclusion!
Boichi is a Korean-born artist currently living and working in Japan. His previous works include Sun-Ken Rock and Terra Formars Asimov.