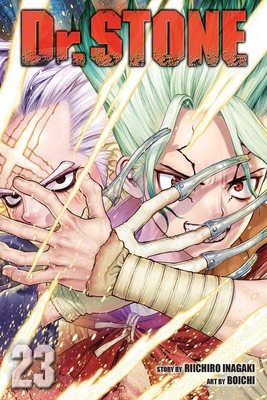 This is book number 23 in the Dr. STONE series.

Senku is back in action, and his revival leads to the Kingdom of Science’s triumphant return. However, the process has revealed a startling secret about the petrification phenomenon—one that represents a forbidden fruit for humanity! Meanwhile, the mission to reach the moon is ramping up into a project of global scale!
Boichi is a Korean-born artist currently living and working in Japan. His previous works include Sun-Ken Rock and Terra Formars Asimov.