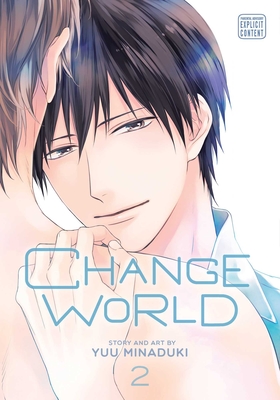 This is book number 2 in the Change World series.

A longtime crush has blossomed into a dream relationship in this Sayonara Game sequel, until a ghost from the past suddenly appears.

Ever since Yosuke confessed his long-held feelings for Arimura, his life with his new boyfriend has been a dream. But when a work colleague and former college classmate enters the scene, his dream relationship faces its first threat.

Yosuke’s dream relationship with his old high school crush Arimura hits some turbulence when Masato Hozumi, a former college classmate of Arimura’s, makes an appearance. And when Yosuke decides to take a position working overseas, it ends up putting the lovers further at odds. Determined to find out the cause of his boyfriend’s strange behavior, Yosuke confronts Hozumi and learns of the troublemaker’s true intentions!
Yuu Minaduki is the creator of over a dozen boys’ love manga, some of which have French, Spanish, and German editions. She is a Leo born on August 7 in Saitama with an O blood type. You can find out more about Yuu Minaduki on her Twitter page, @toriniku_y.