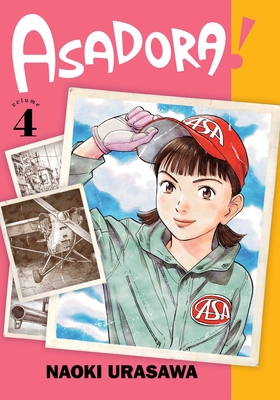 This is book number 4 in the Asadora! series.

A deadly typhoon, a mysterious creature and a girl who won’t quit.

In 2020, a large creature rampages through Tokyo, destroying everything in its path. In 1959, Asa Asada, a spunky young girl from a huge family in Nagoya, is kidnapped for ransom—and not a soul notices. When a typhoon hits Nagoya, Asa and her kidnapper must work together to survive. But there’s more to her kidnapper and this storm than meets the eye.

Asa reluctantly agrees to accompany Yone to an audition at an entertainment agency. However, before they can leave, Mr. Jissoji shows up with news—the mysterious creature has been spotted! With Kasuga nowhere to be found, Asa prepares to take flight to identify the creature. But before she can, Nakaido runs in claiming to have found its weakness, earning himself a seat in Asa’s plane as they take to the skies.
Naoki Urasawa’s career as a manga artist spans more than thirty years and has firmly established him as one of the true manga masters of Japan. Born in Tokyo in 1960, Urasawa debuted with BETA!! in 1983 and hasn’t stopped his impressive output since. Well-versed in a variety of genres, Urasawa’s oeuvre encompasses a multitude of different subjects, such as a romantic comedy (Yawara! A Fashionable Judo Girl), a suspenseful human drama about a former mercenary (Pineapple ARMY; story by Kazuya Kudo), a captivating psychological suspense story (Monster), a sci-fi adventure manga (20th Century Boys), an art heist thriller (Mujirushi: The Sign of Dreams), and a modern reinterpretation of the work of the God of Manga, Osamu Tezuka (Pluto: Urasawa x Tezuka; co-authored with Takashi Nagasaki, supervised by Macoto Tezka, and with the cooperation of Tezuka Productions). Many of his books have spawned popular animated and live-action TV programs and films, and 2008 saw the theatrical release of the first of three live-action Japanese films based on 20th Century Boys.

No stranger to accolades and awards, Urasawa received the 2011 and 2013 Eisner Award for Best U.S. Edition of International Material—Asia, and is a three-time recipient of the prestigious Shogakukan Manga Award, a two-time recipient of the Osamu Tezuka Cultural Prize, and also received the Kodansha Manga Award. Urasawa has also become involved in the world of academia, and in 2008 accepted a guest teaching post at Nagoya Zokei University, where he teaches courses in, of course, manga.
"...[a] juggernaut of the manga world..."

“If you’re itching for adventure, and are craving something to instill your waning faith in humanity, I implore you. Let these works transport you. Fly Urasawa Air.
It’ll get you where you need to go."