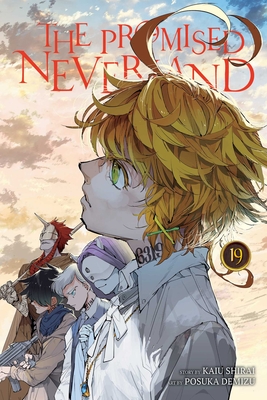 This is book number 19 in the The Promised Neverland series.

Life at Grace Field House had been good for Emma and her fellow orphans. While the daily studying and exams they had to take were tough, their loving caretaker provided them with delicious food and plenty of playtime. But when they discover the horrifying truth about why they are being kept at the orphanage, their lives change forever…

With the queen now dead, chaos envelops the demon world. Emma and her friends head back to Grace Field House in order to rescue the other children from Peter Ratri—but can they make it in time? The final battle for the children’s future begins!
Kaiu Shirai debuted in 2015 with Ashley Gate no Yukue on the Shonen Jump+ website. Shirai first worked with Posuka Demizu on the two-shot Poppy no Negai, which was released in February 2016.