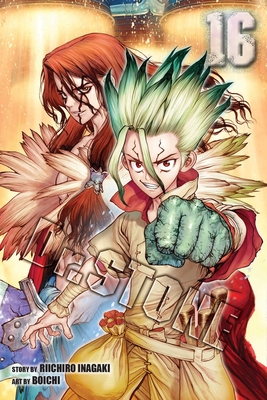 This is book number 16 in the Dr. STONE series.

The battle between the Kingdom of Science and Petrification Kingdom is down to a mano a mano match between Senku and Ibara! With his petrified friends’ spirits supporting him, can Senku finally get his hands on the all-powerful petrification weapon?! Later, a shocking revelation about the mysterious “Why-Man” leads the Kingdom of Science on a new adventure!
Boichi is a Korean-born artist currently living and working in Japan. His previous works include Sun-Ken Rock and Terra Formars Asimov.