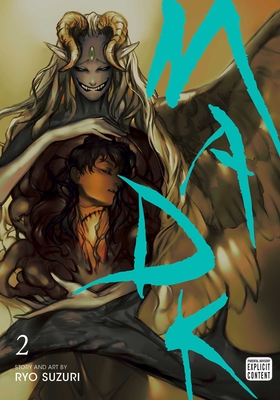 This is book number 2 in the MADK series.

When your kink involves eating a demon’s guts, what else is there to do but summon a bewitching demon to feast on?

Makoto summons a demon to grant his every twisted desire, and in exchange for getting to eat the demon’s guts, Makoto will give him his life!

Makoto has long been ostracized because of his odd hobbies and a sexual kink others see as disgusting. One day, on a whim, he tries a demon-summoning ritual and succeeds in summoning an archduke from hell named J. Makoto sells the archduke his soul and begins a new life in hell as a monster. Living among so many unique demons helps Makoto to grow into his new role. But he finds he can't ignore the feelings he's harboring for the demon who brought him to hell, the beautiful but very twisted Archduke J!
Although MADK is the creator's first English-language release, it was previously published in French. Prior to becoming a mangaka, Ryo Suzuri worked as a 3D modeler on Monster Hunter for the gaming company Capcom. In addition to boys' love, the creator has also released shojo and seinen under the pen name Ryo Sumiyoshi. You can find out more about Ryo Suzuri on Twitter at @szr_Ryo.