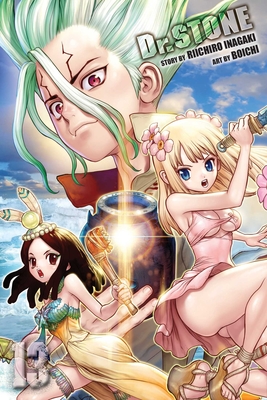 This is book number 13 in the Dr. STONE series.

Kohaku plans to fool the island's ruler in order to infiltrate his harem and steal the petrification weapon, but first Senku needs to retrieve the mobile lab to give Kohaku a total scientific makeover. However, the island’s fiercest warriors have taken over their ship, so the Kingdom of Science might need a little help to pull off this heist!
Boichi is a Korean-born artist currently living and working in Japan. His previous works include Sun-Ken Rock and Terra Formars Asimov.