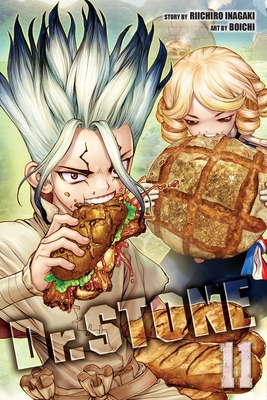 This is book number 11 in the Dr. STONE series.

The advent of the hot-air balloon means Senku and friends can start making accurate maps. And with more allies than ever, the Kingdom of Science starts a food revolution to create tasty, long-lasting bread to feed everyone in the kingdom. Then, while testing their new motorboat in nearby waters, they intercept a cryptic message. Could there be others who survived the petrification?!
Boichi is a Korean-born artist currently living and working in Japan. His previous works include Sun-Ken Rock and Terra Formars Asimov.