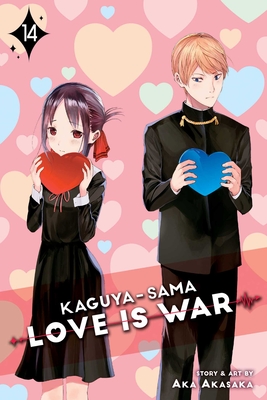 This is book number 14 in the Kaguya-sama: Love is War series.

Two high school geniuses scheme to get the other to confess their love first.

Will it be Miyuki or Kaguya who finally breaks down and confesses their love for the other? Will the love confession be terribly bungled or epically orchestrated? And will the recipient respond appropriately, insanely, or in kind? While these questions will have answers, the romantic quandaries of the rest of the members of the student council will raise a whole new set of questions…

Three months is a long time.
Aka Akasaka got his start as an assistant to Jinsei Kataoka and Kazuma Kondou, the creators of Deadman Wonderland. His first serialized manga was an adaptation of the light novel series Sayonara Piano Sonata, published by Kadokawa in 2011. Kaguya-sama: Love Is War began serialization in Miracle Jump in 2015 but was later moved to Weekly Young Jump in 2016 due to its popularity.