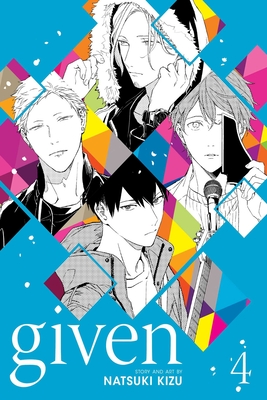 This is book number 4 in the Given series.

As the band focuses on creating new songs and preparing for a music festival tryout, Haruki grows more and more intimidated by the talents of younger members Mafuyu and Uenoyama. Worried that he’s holding them back, he accepts his ex-girlfriend’s request to play in her band. Meanwhile, Akihiko realizes that Haruki has fallen in love with him, setting the stage for a major change in their relationship.
Natsuki Kizu made her professional debut in 2013 with Yukimura Sensei and Kei-kun, followed by the short story collection Links and her breakout series, Given, which has been adapted into drama CDs and an animated TV series. To find out more about her works, you can follow her on Twitter at @kizu_ntk.
“Will grab your feels and refuse to let go.”—BookRiot, BEST MANGA 2020: NEW TITLES TO CHECK OUT THIS YEAR
— BookRiot