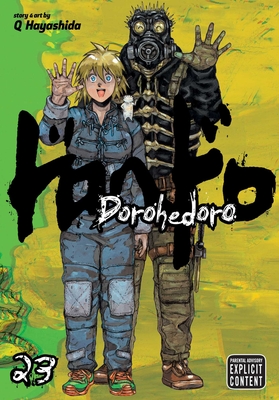 This is book number 23 in the Dorohedoro series.

As En desperately tries to keep the family alive and together, the worlds of the sorcerers and the Hole descend into total chaos. What will happen with the Devils and the sorcerers? Can the Hole be saved? More to the point, can Caiman save Nikaido? The drama and action ramp up to a gloriously bloody climax in this final volume!
Known for her bold style and seamless creation of alternate universes, Q Hayashida made her manga debut with Maken X Another, which ran in Magazine Z and was subsequently adapted into a video game. She followed this series with a sequel, Maken X Another Jack. Dorohedoro is her latest series.