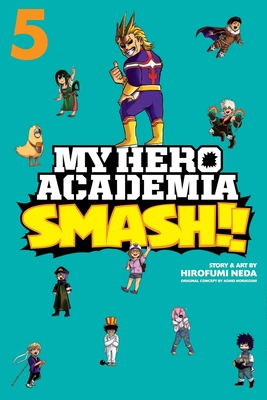 This is book number 5 in the My Hero Academia: Smash!! series.

This final volume of the My Hero Academia parody series goes Plus Ultra with its Gag Quirk to explore new horizons of humiliation! If nothing else, you gotta check out Bakugo’s pretty boy makeover. But if he’s not amused, will anyone get the last laugh? Then, the whole cast teams up to create an unforgettable finale for the amusement of one last super-weird yet terrifying villain!
Hirofumi Neda began his professional career as a manga artist in 2007, winning the Akatsuka Prize Honorable Mention for his short story “Mom Is a Spy.” After publishing several other short stories, he began working as an art assistant to Kohei Horikoshi on Oumagadoki Zoo and later on My Hero Academia.