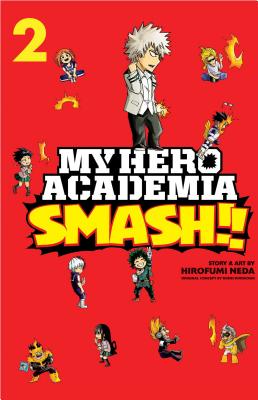 This is book number 2 in the My Hero Academia: Smash!! series.

Yayyy! This volume of the My Hero Academia parody series covers the Sports Festival, internships and other fun stuff. The Sports Festival turns into a crazy baseball game, and then Izuku Midoriya, a formerly Quirkless boy and now the inheritor of the world’s greatest superpower, starts having some weird fantasies. Plus we all get turned into…babies? How could you not want to read about that?!
Hirofumi Neda began his professional career as a manga artist in 2007, winning the Akatsuka Prize Honorable Mention for his short story “Mom Is a Spy.” After publishing several other short stories, he began working as an art assistant to Kohei Horikoshi on Oumagadoki Zoo and later on My Hero Academia.