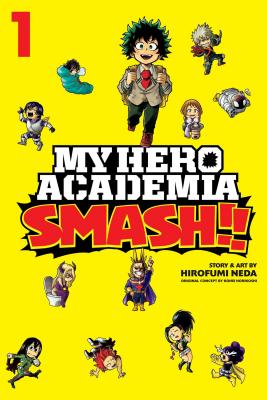 This is book number 1 in the My Hero Academia: Smash!! series.

Listen up! Follow the story of Midoriya, All Might and all the other aspiring heroes of U.A. High, but with hilarious twists! In this first volume, find out how Midoriya really trained to receive One For All and learn the U.A. students’ goofy thoughts during their first practical exams…plus, All Might as Santa Claus? What are you waiting for? Start reading!!
Hirofumi Neda began his professional career as a manga artist in 2007, winning the Akatsuka Prize Honorable Mention for his short story “Mom Is a Spy.” After publishing several other short stories, he began working as an art assistant to Kohei Horikoshi on Oumagadoki Zoo and later on My Hero Academia.