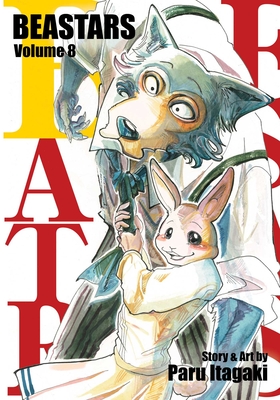 This is book number 8 in the Beastars series.

Gray wolf Legoshi begins training with giant panda Gohin in order to better protect his friend, but he faces an ethical paradox when he is told he must eat meat to grow more powerful. Meanwhile, herbivorous red deer Louis is choking down the flesh of beasts to maintain his status as the leader of a carnivorous lion gang. Yet when he runs into Legoshi carrying a bag of meat, Louis feels betrayed. Legoshi continues to train, becoming more powerful in some ways yet weaker in others—and then his grades begin to drop. Even worse, dwarf rabbit Haru is mad at him!
Paru Itagaki began her professional career as a manga author in 2016 with the short story collection Beast Complex. Beastars is her first serialization. Beastars has won multiple awards in Japan, including the prestigious 2018 Manga Taisho Award.