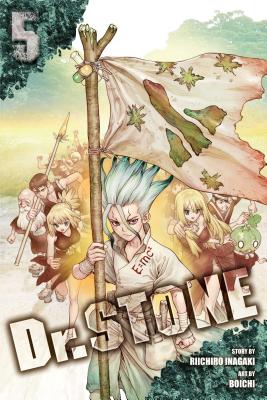 This is book number 5 in the Dr. STONE series.

The Grand Bout Tournament to decide the village chief has begun! Standing in the way of Senku’s Kingdom of Science is the powerful warrior Magma, who's facing Kinro in the opening match. Kinro's bad eyesight gives him a decided disadvantage, but thanks to the power of science, a pair of glasses might just be the thing to tip the scales in his favor!
Boichi is a Korean-born artist currently living and working in Japan. His previous works include Sun-Ken Rock and Terra Formars Asimov.