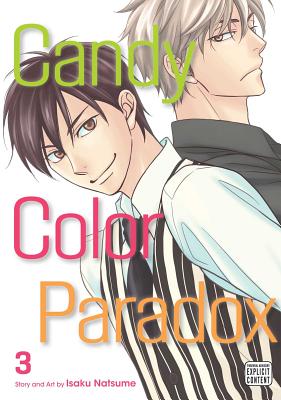 This is book number 3 in the Candy Color Paradox series.

Reporter Onoe and photographer Kaburagi constantly bicker and argue on their stakeouts, but will their antagonistic behavior paradoxically evolve into something sweeter?

Satoshi Onoe, a reporter for a weekly magazine, has a new stakeout partner, and he’s anything but thrilled about it. Photographer Motoharu Kaburagi’s unconventional reporting methods and overall bad attitude are enough to drive Onoe insane. But the more the two work together, the closer they get.

It’s been nearly a year since Onoe and Kaburagi began dating, and their office has just hired a new recruit—Kasai. Onoe is thrilled to have a junior to mentor, but Kasai seems to see Onoe only as a rival. And when Kasai discovers Onoe gets most of his scoops through Kaburagi, he throws down the gauntlet and declares that he will make Kaburagi his!
Isaku Natsume’s previous works include False Memories, Ginger Honey, Devil’s Honey, Dash!, Tight Rope, and her debut title, No Color. She has published doujinshi (independent comics) under the circle names “139” and “Cheke-rara.” Born in July, she’s a Leo with an O blood type.