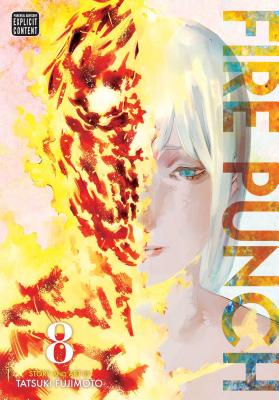 This is book number 8 in the Fire Punch series.

Agni’s body is once again engulfed in flames, and he burns everyone and everything in his path on his way to Judah. Sun’s blind belief explodes into fury as his savior Agni becomes the villain! Will it be an inferno of revenge or a redeeming light finally end this frozen world?!
Tatsuki Fujimoto won Honorable Mention in the November 2013 Shueisha Crown Newcomers’ Awards for his debut one-shot story “Love Is Blind.” His first series, Fire Punch, ran for eight volumes. Chainsaw Man began serialization in 2018 in Weekly Shonen Jump. “Look Back” and “Goodbye, Eri” were published in 2021 and 2022 in Japan to widespread critical acclaim.