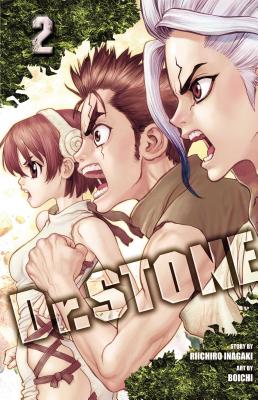 This is book number 2 in the Dr. STONE series.

Senku, Taiju and Yuzuriha are well on their way to crafting gunpowder when they spot smoke far off in the distance. Convinced that it’s a sign of other humans, Senku takes a huge risk by sending up a smoke signal of their own. Meanwhile, Tsukasa is determined to stop their progress on gunpowder, and his arrival on the scene could spell the end for our heroes!
Boichi is a Korean-born artist currently living and working in Japan. His previous works include Sun-Ken Rock and Terra Formars Asimov.