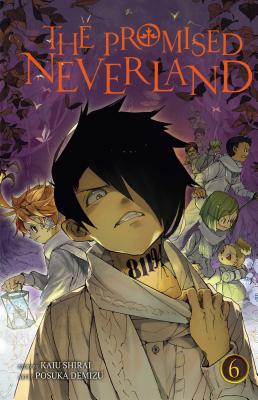 This is book number 6 in the The Promised Neverland series.

The children have successfully escaped Grace Field House, but their troubles are just beginning. Now up against a dangerous natural world and their demon pursuers, Emma and Ray struggle to lead the children to safety. Just when the situation is at its most dire, a mysterious girl suddenly appears. Is she there to help, or is it a demonic trap…?
Kaiu Shirai debuted in 2015 with Ashley Gate no Yukue on the Shonen Jump+ website. Shirai first worked with Posuka Demizu on the two-shot Poppy no Negai, which was released in February 2016.