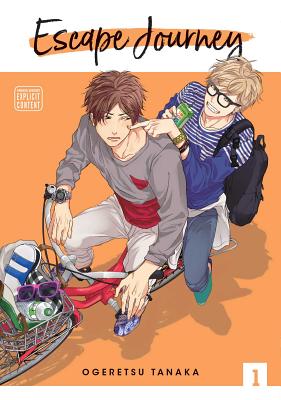 This is book number 1 in the Escape Journey series.

Naoto and Taichi’s turbulent high school love crashed and burned, but a reunion in college puts love back on their radar.

Naoto and Taichi’s first try at love during their high school days crashed and burned. Years later the two unexpectedly reunite on their first day of college. Tumultuous love often burns hot, and the glowing embers of their previous relationship reignite into a second try at love.

It’s Naoto’s first day of college, and the last person he expected to see was his high school ex Taichi, whom he’d dumped after a huge argument. Even though years have passed, Naoto finds he’s still steamed over some of the harsh words that were exchanged, but he also recognizes how much Taichi has matured since then and can’t help getting pulled back in. Will the discovery of his friend’s crush on Taichi fray the fragile threads of this mending relationship?
In addition to creating boys’ love, Ogeretsu Tanaka also creates non-BL stories under the pen name Tanaka Marumero. She was born on July 3 under the sign of Cancer and has an A blood type. You can find out more about Ogeretsu Tanaka on her Twitter page, @tanaca_.