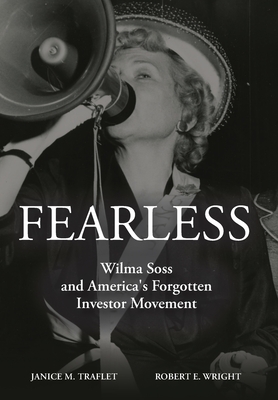 
Usually Ships in 1-5 Days
Shareholder activist Wilma Soss rocketed to fame in the 1950s fighting for the rights of the individual investor. But over the years, her legacy was almost forgotten. If you're looking for the intellectual heritage of 2021's WallStreetBets phenomenon or the reason Fearless Girl stands as a symbol of American optimism today, look no further than the life, times and efforts of the fearless shareholder activist, Wilma Soss.
Based on archival documents, this is the true story of how a disparate group of activist investors--from a PR star to a Holocaust survivor--found each other and became the advocates Fortune 500 management loved to hate.
Soss and her band of activists, including the incomparable Evelyn Y. Davis, leveraged the media to promote the rights of small shareholders. The idea was simple: buy one share of stock to gain access to shareholder meetings and remind management whom they really serve. These "corporate gadflies" were determined to speak their minds, even if it meant bringing their own megaphones or being dragged out of public meetings. But their message was undeniable, and ultimately changed corporate America for the better. Increased opportunities in the workplace, improved shareholder voting rights and greater corporate transparency were just some of the reforms Wilma Soss and her Federation kicked off in the post-war era.

Business historian Janice M. Traflet (Ph.D., Columbia University) explores in her research many facets of Wall Street history, especially how ordinary citizens have interacted with the securities markets over time. She is the author of the well-acclaimed book A Nation of Small Shareowners (Johns Hopkins), in addition to numerous articles in journals such as Business History, Journal of Business Ethics, Journal of Cultural Economy and Essays in Economic and Business History. She serves on the Financial History editorial board, in addition to the board of the Economic and Business History Society. She teaches in the Freeman College of Management at Bucknell University. Policy historian Robert E. Wright (Ph.D., SUNY Buffalo) has (co)authored 24 books, including The First Wall Street (Chicago 2005), One Nation Under Debt (McGraw Hill 2008), and The Wall Street Journal Guide to the 50 Economic Indicators That Really Matter (HarperCollins 2011). He taught courses in business, economics, and policy at Temple, Virginia, New York, and Augustana universities before joining the American Institute for Economic Research in January 2021. He has appeared on C-SPAN, Fox Business, and other broadcast outlets and been featured in Barron's, Los Angeles Times, New York Times, Wall Street Journal, and Washington Post.